prepared for
The United States Army
MUSEUM OF THE NONCOMMISSIONED OFFICER 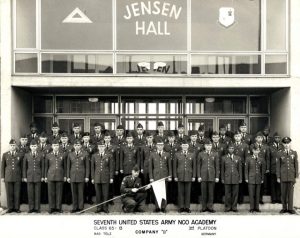 History of the NCO Creed

It started on the fourth floor of Building 4 at Fort
Benning, Georgia, in 1973 with a plain white sheet of paper
and three letters;

A History of the NCO

This is a reprint and expansion on the original, concise history of the US Army Noncommissioned Officer. Originally titled the Short History of the NCO, curator of the NCO Museum in Ft Bliss Texas Mr. Larry Arms updates and expands on his original writings and brings the reader up to date with NCO history.
View PDF

This is a snapshot on the development of the Technical and the Specialists ranks in the US Army, one which is is still in existence. This also describes the proliferation of enlisted ranks and specialities prior to the rank redesign in Jun 1920.
View PDF

The Year of the Noncommissioned Officer is well underway and NCOs are being honored Army-wide, but Fort Myer Military Community Command Sgt. Maj. Jefferson Varner III wants to ensure that the year-long celebration of enlisted leaders isn’t limited to those currently serving.
View PDF

In May 1958, Congress enacted Public Law 85-422 which established two additional senior enlisted pay grades (E-8 and E-9). Each service was allowed to define the two new pay grades and the Army began to restructure its rank insignia and titles of grade in that year. This is the change over time since 1958 to the present on the changes to the US Army enlisted rank.
View PDF

This October 2007 book was prepared by the US Army Sergeants Major Academy. The preface reads “The call to war is often met by young Soldiers who lack an understanding of what they are about to encounter. These young Soldiers must be trained, prepared, and then led in battle by those with experience and understanding—the Noncommissioned Officer Corps. In an effort to preserve the history of the US Army Noncommissioned Officer.
View PDF

The Center for Advanced of Studies of the United States Army Noncommissioned Officer is sad to have learned of the passing of the 2nd Sergeant Major of the Army SMA (Ret.) George W. Dunaway who served as SMA between September 1968 to September 1970. Born July 24, 1922 in Richmond, VA, SMA Dunaway enlisted in the Virginia Army National Guard’s 29th Division in January 1940 and was mobilized with the Division in February 1941.
View PDF

The Defense Advisory Committee on Professional Technical Compensation (commonly called the Cordiner Committee) was created in March 1956 “to study a possible adjustment to the existing pay structure” for retention purposes. On 8 May 1957 they recommended to the Secretary of Defense that pay grades E-8 and E-9 be created in all the services.
View PDF